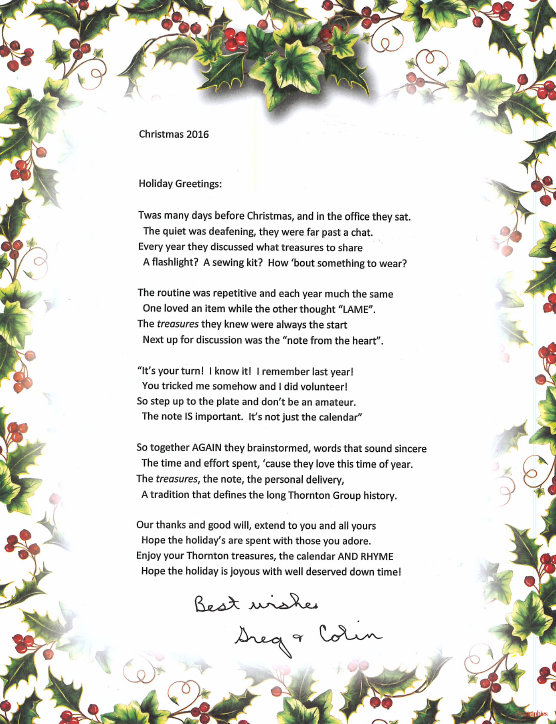 Twas many days before Christmas, and in the office they sat.

The  quiet was deafening, they were far past a chat.

A flashlight? A sewing kit? How “bout something to wear”?

The routine was repetitive and each year much the same

One loved an item while the other thought “LAME”.

The treasures they knew were always the start

Next up for discussion was the “note from the heart”.

“it’s your turn! I know it! I remember last year!

You tricked me somehow and I did volunteer!

So step up to the plate and don’t be an amateur.

The note IS important. It’s not just the calendar”

So together AGAIN they brainstormed, words that sound sincere

The time and effort spend, “cause they love this time of year.

The treasures, the note, the personal delivery,

A tradition that defines the long Thornton Group history.”

Our thanks and good will, extend to you and all yours

Hope the holiday’s are spend with those you adore.

Enjoy your Thornton treasures, the calendar AND RHYME

Hope the holiday is joyous with well deserved down time!

It’s early in the evening and there’s a knock on the door. You answer and are greeted by an official-looking man who claims he needs to see your utility bill to confirm you’re getting your energy rebate.

Do you let him in?

While he may be legitimate, he may also be using deception to sell you something you don’t want. Here are some suggestions for finding out:

Most importantly, use your common sense. Door-to-door salespeople can be pretty persuasive, but if something doesn’t seem right to you, trust your gut. Say, “No thanks.”

Of course, if everything checks out with the salesperson, and the offer is a good one, consider taking advantage of it.

Are You Ready to Buy Up?

No matter how much you love your current property, you may be dreaming of the day you can buy up into a better home in a better neighbourhood.

Is that day today, or, is it a few years down the road?

Here’s a quick way to make that assessment.

First, make a list of all the practical reasons why it might be time to move up. Those reasons might include features such as: more bedrooms, proximity to work and school, a larger backyard with trees, nearby parks and walking paths and better access to things you enjoy like theatre.

Next, make a list of the emotional reasons for making such a move. Those reasons might include memorable get-togethers with friends on a more spacious deck, an easier and less stressful commute to work, more family time with the kids and enjoyable Saturday golf at a nearby course.

Finally, take a financial snapshot to determine if you can afford to move up. You’ll need to get a good idea of what your current property will sell for in today’s market, average price of homes in your desired neighbourhood, and how much mortgage you’ll need.

Once you have all that down on paper, you’ll have a clear picture of your readiness. If the practical and emotional reasons for buying up are compelling, and you can afford to make the move, then you have your answer.

The time is now!

By the way, if you need help in making this determination – especially figuring out what your home will likely sell for, call today. 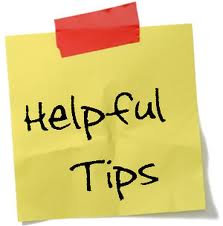 The process of buying or selling a house seems to involve a million details.  It is important that you educate yourself on as many parts of this process as you can—this knowledge could mean the difference of thousands of dollars in the long-run.  The legal issues involved in the process are often particularly intricate, ranging from matters of common knowledge to subtle details that might escape the untrained eye.  Any of these issues, if not handled properly, could develop into larger problems

With so many  legal issues to consider, your first step should be to seek out experienced professionals to help educate you and represent your best legal interests.  Begin with an experienced real estate agent, who can help guide you through the initial hoops.  S/he should also be able to point you in the direction of a reputable local real estate lawyer to assist you in all legal matters involved in the purchase or sale of your house.

While there are countless legal details involved in a real estate transaction, some seem to pose larger problems than others.  We’ve outlined two legal clauses that are commonly misunderstood and may cost you money if not worded correctly.  Handle these carefully and you will be on track to a successful sale or purchase!

Some real estate transactions have been sabotaged due to the wording of the home inspection clause.  This clause originally allowed that the buyer has the right to withdraw their offer if the home inspection yielded any undesirable results.  However, this allowance was known to backfire, as Buyers took advantage of it, using some non-issue stated in the inspection as an excuse for having changed their minds.  Of course, this was unfair to the Sellers, as they’d poured time and money into what they believed was a sure deal.  Not only might they have missed out on other offers in the interim, but their house might also now be unfairly considered a “problem home.”  Additionally, they’d now have to shoulder the costs of continuing to market the property.  All of this adds up.

In order to remedy this potential problem, the clause should indicate that the seller has the option of repairing any problems the home inspection might point to.  With this slight change in the clause, both buyer and seller are protected.

To ensure this clause is fair from one side of the bargain to the other, work closely with a lawyer experienced in these transactions and all the nuances that may affect the outcome for you.

It is the right of a home buyer to add a survey clause to the real estate contract on the home they’d like to purchase.  If you are on the selling end of the contract, be aware.  If you have added an addition or a pool to your property since the last survey was produced, your survey will no longer be considered up-to-date and the Buyer may request that a new one be drawn up—the cost of which you will incur.  The price of this process will run anywhere from $700 to $1000.

Your real estate agent has the responsibility to provide you with the most recent survey of your home.  It is then the Buyer’s right to decide if it is acceptable.  An experienced agent should offer you reliable counsel if you encounter an issue with this clause, but it is advisable to talk to your lawyer if you’re unsure at all of the potential ramifications involved.  Remember, the wording of this clause could cost or save you thousands of dollars.

“Changing market conditions compounded by a series of government interventions this year have put home buyers and sellers in a holding pattern,” Dan Morrison, Real Estate Board of Greater Vancouver (REBGV) president said. “Potential buyers and sellers are taking a wait-and-see approach to try and better understand what these changes mean for them.”

Last month’s new listing count was 9.5 per cent below the region’s 10-year new listing average for the month.

The sales-to-active listings ratio for October 2016 is 24.4 per cent. Generally, analysts say that downward pressure on home prices occurs when the ratio dips below the 12 per cent mark for a sustained period, while home prices often experience upward pressure when it surpasses 20 per cent over several months.

“While sales are down across the different property types, it’s the detached market that’s seen the largest reduction in home buyer demand in recent months,” Morrison said. “It’s important to work with your local REALTOR® to help you navigate today’s changing trends.”

The MLS® Home Price Index composite benchmark price for all residential properties in Metro Vancouver is currently $919,300. This represents a 24.8 per cent increase compared to October 2015 and a 0.8 per cent decline compared to September 2016.

Correction notice
Altus Group, the provider of the national MLS® Home Price Index (MLS® HPI), discovered a calculation error in their September 2016 reporting. This error resulted in variances of between 0.1 and 5 per cent in the benchmark prices the REBGV released for September 2016. Click here for the corrected September MLS® HPI numbers.

The real estate industry is a key economic driver in British Columbia. In 2015, 42,326 homes changed ownership in the Board’s area, generating $2.7 billion in economic spin-off activity and an estimated 19,000 jobs. The total dollar value of residential sales transacted through the MLS® system in Greater Vancouver totalled $39 billion in 2015.

The Real Estate Board of Greater Vancouver is an association representing more than 13,000 REALTORS® and their companies. The Board provides a variety of member services, including the Multiple Listing Service®. For more information on real estate, statistics, and buying or selling a home, contact a local Realtor or visit www.rebgv.org.